i know i'm always writing so you think i'm good with words. 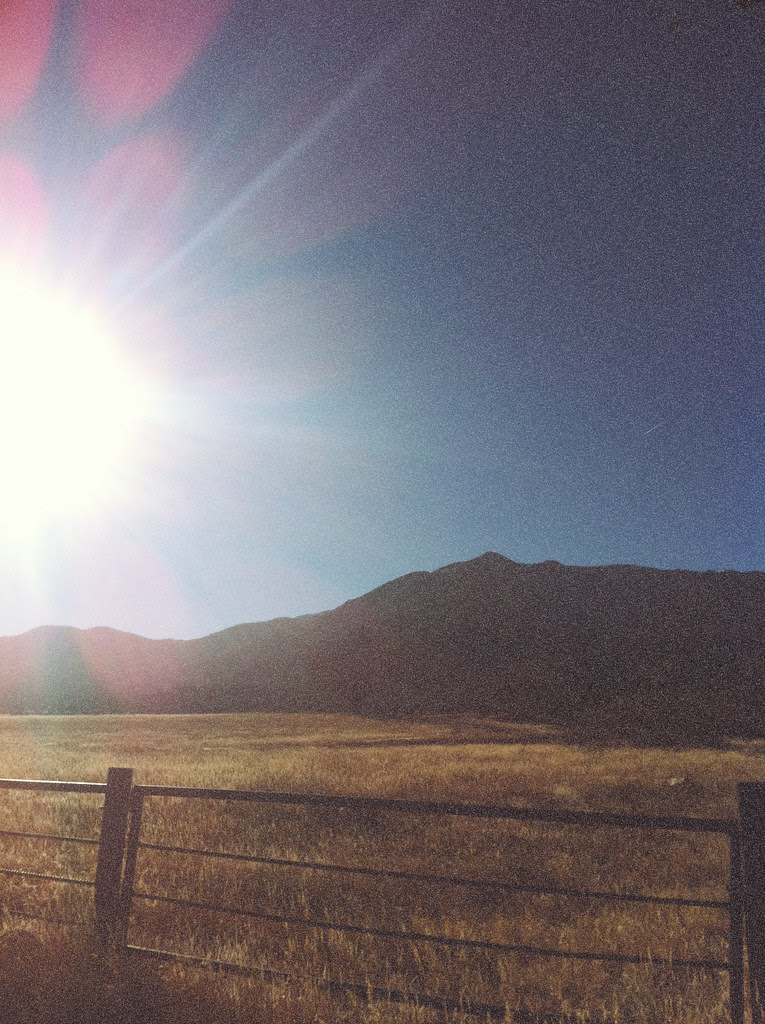 It's one of those nights. Or maybe one of those days. Where the world seems too big and not in a good way. And I look around my room, flip through Catcher in the Rye for a few minutes. Scroll down Google Reader and see all the writers I'm surrounded by. All the kids my age or younger. All the words they've written. Everything I'll never be able to write. All I have are shaky words stacked up against all the poetry ever written and my words don't stand a chance.

There's a Jaymay song- I don't even remember the name of the song, but whenever I'm doing anything that doesn't require a lot of thought, even just standing at the kitchen counter making coffee, the lyrics will repeat in my head. "I know I'm always writing so you think I'm good with words but I can hardly express how I feel." I've listened to those lyrics hundreds of times and they never become less true.

Sometimes I get too used to people telling me I'm a good writer. They just become words, words that are too easy to shrug off.

Tonight is not one of those times. Tonight, it's becoming too easy to think that I'll never be able to write what I want to write. I feel like the only things that I can write are just other people's thoughts, repeated in my clumsy way.

This post isn't me asking you to tell me I'm wrong. (I understand that this feeling will go away by the morning.) This is just me, trying to be honest. Trying to be vulnerable in a way I'm not used to.
written by Katie 17 comments:

I have a really cute family. I live in a really pretty place. 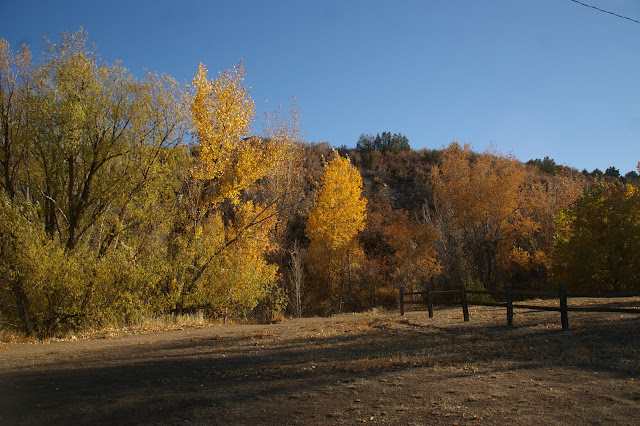 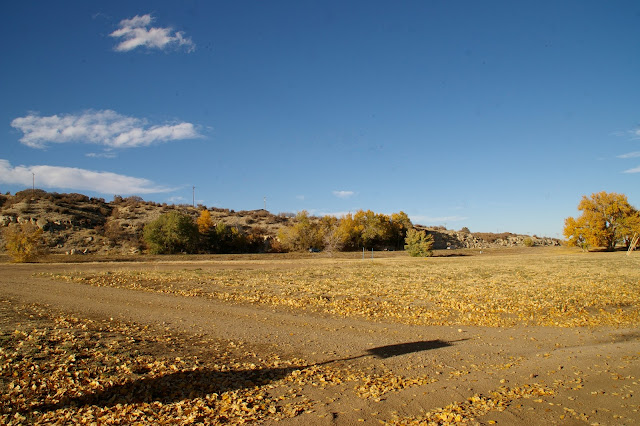 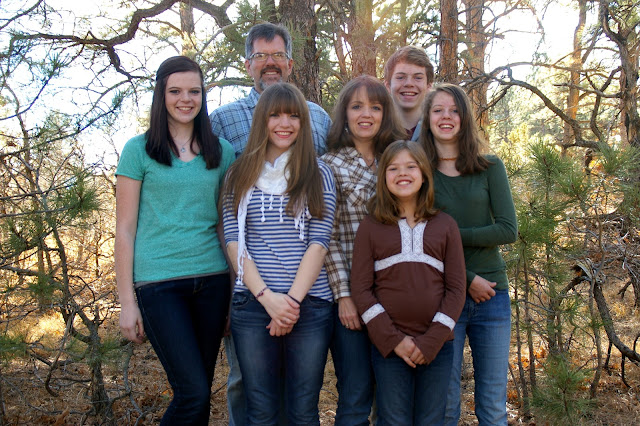 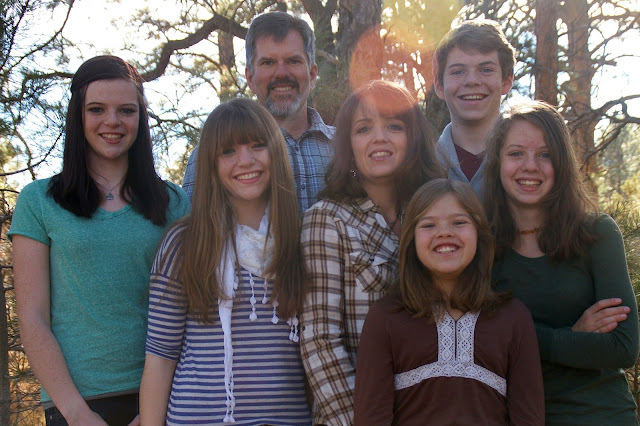 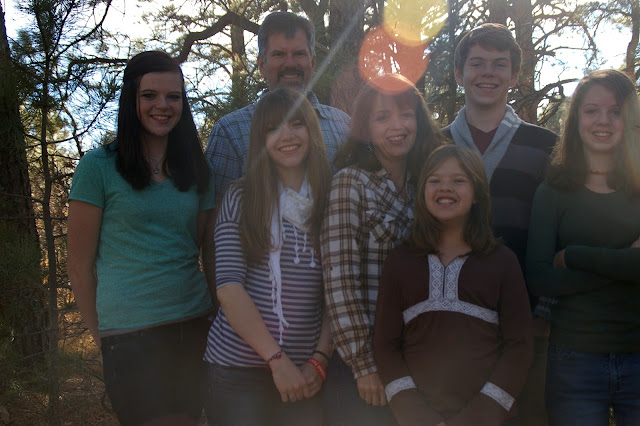 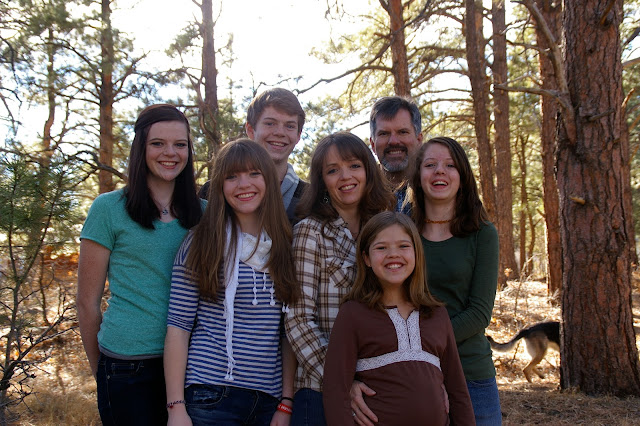 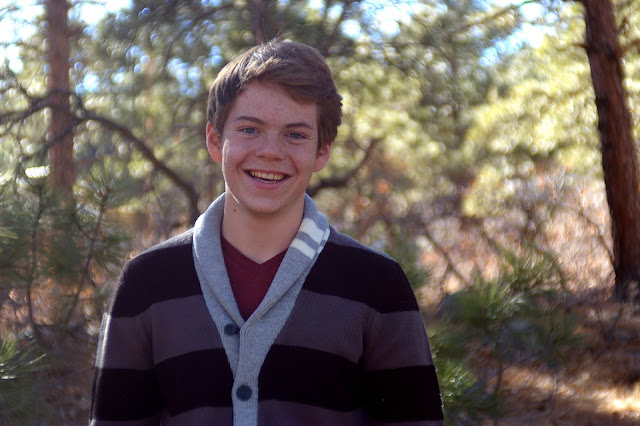 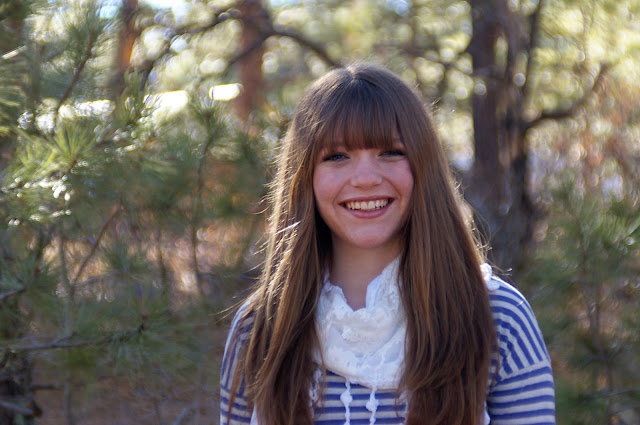 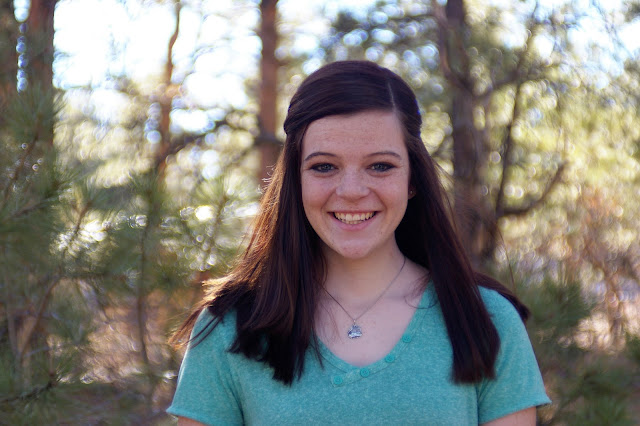 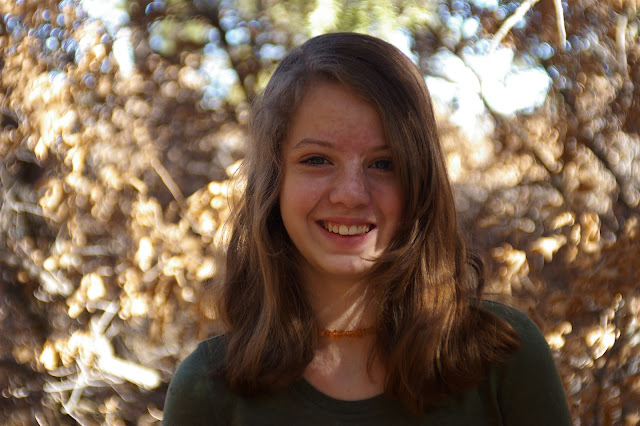 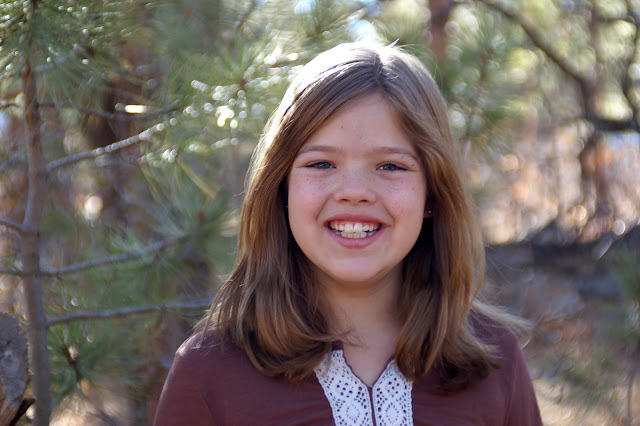 After I finished taking photos of the family, Anna and I took a few dozen pictures of the two of us using my 50mm prime lens. They all turned out blurry- manual focus and self timer don't go together very well. Here are a few of the outtakes though...my favorites are our failed attempts at April Ludgating. (I love April Ludgate.) 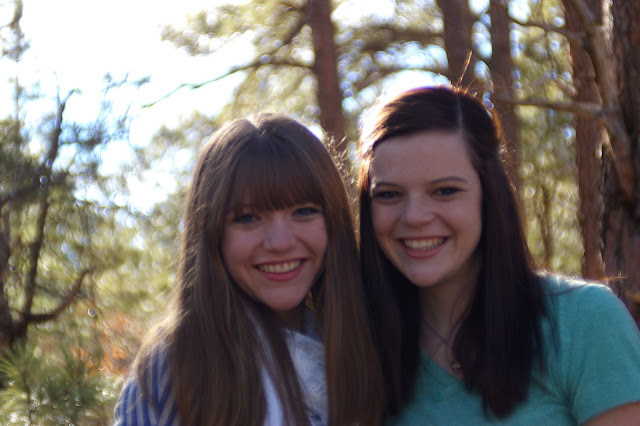 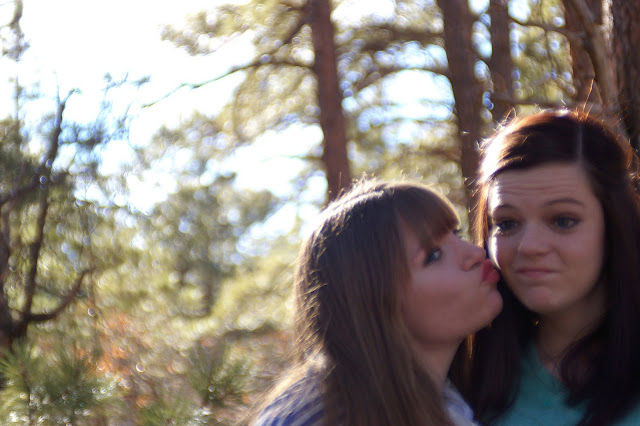 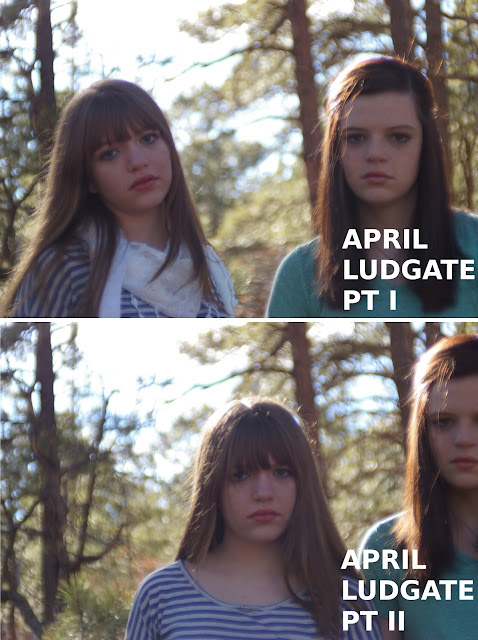 Have a happy Tuesday.
written by Katie 13 comments: 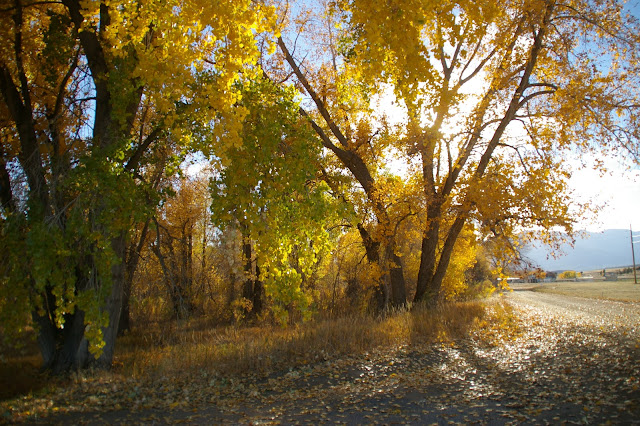 these words are six months old and still make sense to me.
written by Katie 9 comments:

this is what i'm thankful for. 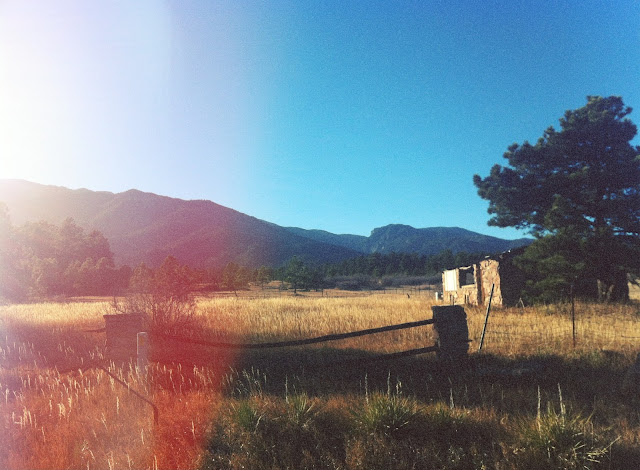 It’s Friday night and we’re all tired and I’m jittery from too much caffeine and I am thankful.

And even though I think thankfulness shouldn’t just be focused on for a Thursday in November, there’s something beautiful about the flood of blog posts and Facebook statuses, all proclaiming thankfulness. I love the thought of so many individuals sitting down and actively thinking about what they’re thankful for. So here are a few of the things that are standing out to me, the things that I’m intensely thankful for.

I’m thankful for these mountains. See, when I moved to Indiana, there were nights when I would fall asleep listening to John Denver’s Rocky Mountain High and crying... “And the Colorado rocky mountain high, I’ve seen it raining fire from the sky,” and I would look outside my window and see flat cornfields stretching out to the horizon and more than anything, I would miss the mountains. Now I’m back in the mountains. I don’t miss the cornfields themselves, but I miss everything they represent about home. And at the same time- I am so grateful for these mountains. I’m thankful for the sunset sinking behind them every night, the way they gradually change colors as I drive up into them, the way it smells like sunshine on pine needles.

I am so incredibly thankful for Joseph. (I’m thankful for my sisters too, but this is different. Absence makes the heart grow fonder and everything.) I’m thankful that Joseph picked up the phone two months ago when I called him, sobbing because the boy who I thought was my best friend had just broken my heart. I’m thankful that he stayed on the phone talking me through it until I finally calmed down, and then, an hour after we hung up, texted me to see how I was doing. I’m thankful for all the memories we have, and always fighting, always getting so angry that I would end up in tears, all the wrestling on the couch, him tickling me until I was laughing so hard that I couldn’t breathe. He was my very first best friend, and I love him more than I could ever say.

I’m thankful for Steve Chbosky. Thankful that he wrote a book, made a movie, took the time to talk to me. I’m thankful for when he told me, “write, girl, write,” and my sister & I couldn’t stop laughing about it.

I’m thankful for the kind of friends I have- the ones who are just as much my friends now as before I left, and that when I visit, nothing has changed. These are the people who laugh with me until our sides and stomachs ache. These are the friends who go with me to Starbucks three times a day, who make me eat a granola bar when the caffeine high has me tapping my fingers on the table and shifting around in my seat. These are the people who will drive around for an hour at night, talking about nothing and everything and listening to One Direction and driving and driving until we realize we’ve looped around the same neighborhood five times. I’m thankful for impromptu movie Sunday and playing True American (Mountain Dew style) until we all threw up, and the times we've jokes about that night. I’m thankful for the five years of history we have, all the church retreats and Wednesday nights spent at youth group, all the sleepovers, all the hours spent together. I’m so overwhelming thankful for these friends.

I’m thankful that my parents don’t make me eat mashed potatoes anymore. And that pie is acceptable as a meal for the entire weekend after Thanksgiving.

I’m thankful that Seattle is a place that exists. And that Markus Zusak writes books. And that The Avett Brothers make music. And that I have enough frequent flyer miles for a plane ticket anywhere.

And most of all, I’m thankful that my entire family is together this weekend.
written by Katie 10 comments:

i. I blatantly stole this from Kendall. I guess that's what true internet friendship is, borrowing and creating and being okay with it.

ii. I haven't blogged in two months. Life has been happening since then. For instance: 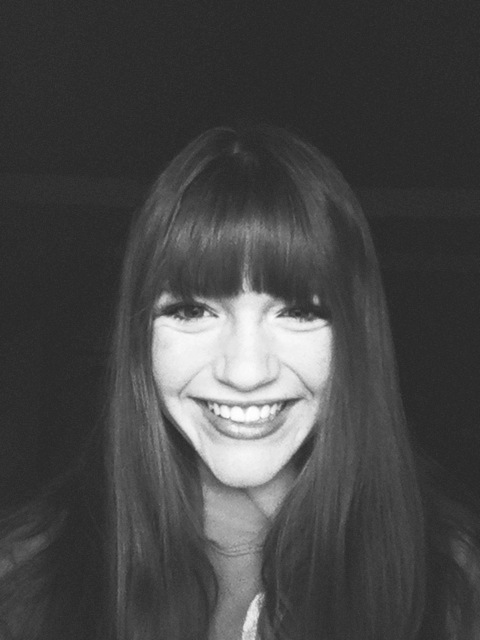 iv. My family moved to Colorado. This weekend, we're permanently moving to the town where my mom grew up- in the mountains. I love the mountains more than I could ever say, and yet, I miss the cornfields in Indiana and the fall sunsets where it looked like someone took a match to the sky.

v. Stephen Chbosky. Do you know him? You might recognize his book. I sent some writing to him a month ago. Two weeks after I sent it, I received an email from his assistant. He called me a few days later. "Oh my god," he said, and I recognized his voice from watching interviews with him and Emma Watson, and the whole moment felt unbelievably surreal, "Oh my god, you are a natural born novelist. I was blown away." And then we talked for 15 minutes, and then he told me to call him whenever, and then he wrote me a letter of recommendation to...

vi. Pratt. Last night, I entered in my Social Security number, updated the essay portion, uploaded my writing portfolio, and submitted my application to Pratt in Brooklyn for creative writing next year. I want to go there more than I've wanted anything in a long time. If I can get in, if I can pay for it, I'll move to New York next August.

vii. My best friend is having brain surgery in a month. I am so scared and so worried.

viii. "When it's time to go, you need to go because you're going to find something new." -Pat Cleveland. In July, the one year mark came and went, and now I've been in America without leaving for well over a year, and it is so beyond time to leave. I've been researching tickets to Paris for the summer, dreaming of spending the summer writing, trying to convince my parents that I can sleep on the floor of Shakespeare & Co. But Paris and Europe are familiar to me, and I want to go somewhere new, somewhere different. Does anyone want to go on an adventure with me?

ix. "All you have to do is write one true sentence. Write the truest sentence that you know." Even though I haven't written anything here in awhile, I've been writing all the time, and I'm learning that Mr. Hemingway was right- the important thing is writing, and writing honestly.

x. "What has God been teaching you lately?" I texted Jillian earlier this morning after someone asked me that same question and I stumbled out something about contentment. And because Jillian is kind and smart and important and maybe most of all, self aware and articulate, she responded with, "That is a very good question. I really have to give it more thought, especially because I forget to listen to God a lot. Mostly though, to live in THIS now, not yesterday's now, or tomorrow's now. And to stop trying to control situations. That I am not responsible for the choices or mistakes of everyone I love. To stop being so cynical and just love people. Love is inefficient and all that." She followed it up with asking me what God has been teaching me, and a text about a boy, and I smiled because that's the kind of friendship we have. And I said, more articulate than the first time I tried to say it, "Me...I think I'm learning how to be content. That even though I don't want to be in Colorado, I can still learn and grow here. And I think I'm learning how to trust and how to be vulnerable, even when it's hard and scary." What has God been teaching you?

xi. This post came at the request of my brother Joseph and my friend William. It won't be so long between this and the next post, okay?

ps. here is something I wrote, and here is an interview I did.
written by Katie 17 comments:
Older Posts Home
Subscribe to: Posts (Atom) 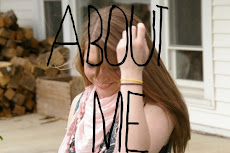